A high fog covered the sky, and behind it the moon shone, so that the forest was filled with a gauzelike light. There was none of the sharp outline we think of as reality. [Tortilla Flat] 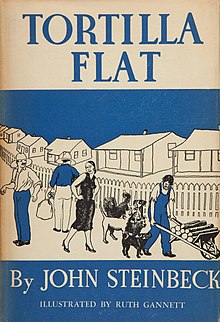 They are novels in that each one is a series of connected stories, occurring chronologically. Put together they only equal the length of one shorter-than-average novel. But in Tortilla Flat and Cannery Row, there’s more heart, and soul, than just about anything before or since.

Light in tone and small in scope, these short works capture everyday humanity, its strengths and weaknesses, to a T, because that’s what Steinbeck did better than anyone. Together they paint a true to life picture of the Monterey that Steinbeck knew as a young man.

They should be read consecutively, Tortilla Flat and then Cannery Row. Tortilla Flat, set in the squalid outskirts of Monterey, charts the friendship and fates of a group of young men bonded by their mutual lack of opportunity and ambition. Cannery Row is the industrial shoreline of Monterey, and its inhabitants reflect all the earthiness of any Depression-era factory town or village. The reader begins to feel like Monterey is a place they know and understand.

The stories should be read with appreciation for Steinbeck’s language: spare, vivid, poetic, every word a key to something. The characters’ speech is unadorned, natural to the place, time and class of the speaker:

“He ain’t going to be what you’d call tender,” said Hazel. “You’d have to cook him about two weeks to get him tender. How old about do you judge he was, Mack?”

Eddie said “How old can a chicken get, do you think—that’s if nobody pushes him around or he don’t get sick?”

“That’s something nobody isn’t ever going to find out,” said Jones. [Cannery Row]

Steinbeck wrote some weightier books, far more serious and larger in scope. But these two short works are American gems, they say so much so sweetly about what we’re capable of as simple human beings.

Apparently, when Steinbeck won the Nobel Prize for Literature in 1962 there was criticism of the choice. I will never understand how that could be. While taste is a subjective matter, when you weigh the stories, the strength of the characters and their lives, along with the richness of the prose, I cannot see another writer more deserving of the award. In my school of thought, Steinbeck is the Dean of American writers.