” I think the Church Catechism has a good deal to do with the unhappy relations which commonly even now exist between parents and children. That work was written too exclusively from the parental point of view; the person who composed it did not get a few children to come in and help him; he was clearly not young himself, nor should I say it was the work of one who liked children. . .” 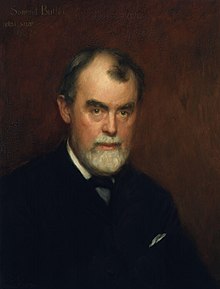 ABOUT WHAT? . . . This is a multigenerational family saga of 19th Century rural England, but it’s much more than just a story about a family’s historical struggles. The family is a typical one full of ordinary people who make the parish church their means of livelihood and the foundation of their self-identity. But, despite their ordinary lives, the insights Butler gives us about such families are extraordinary.

SIGNIFICANCE? . . . Thanks to its eloquent narration and its depiction of the traditional way the older generation raises and instructs the younger generation, The Way of All Flesh is one of the great novels exposing the cruelty of strict religions and other hypocrisies. The book dared to say things rarely, or never before, said about established religion and Victorian morals. The book was monumental in its impact on modern thinking. It was a work of humanist philosophy that used a fictional story as its vehicle.

SO SHOULD I READ IT OR WHAT? . . . Maybe. . . The plot is slow but it’s a slow-motion slap in the face. The characters are unremarkable but that’s how Butler needed them to be, and they’re as well-drawn and real as a portrait on a wall. The dialogue is sparse and the prose is unadorned. But Butler’s message is full of sympathy and kindness.

YOU GOT ANYTHING ELSE TO ADD? . . . . The finished manuscript sat in a drawer for twenty years until Samuel Butler gave it to a friend and as a dying wish asked the friend to arrange for it to be published, finally. It was published a year after Butler’s death.