“For Fear he arms, and is of Arms afraid;” 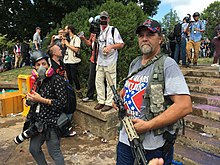 Here is a link to a video that I was lucky enough to play a small part in (old man with his children in synagogue). We’re hoping messages like this will save lives, somehow . . . https://www.youtube.com/watch?v=Yi47r7i8_y4&feature=youtu.be

Yesterday, another free-wheeling random-style revenge shooting. Besides all the other things that ought to be said, I want to say something about the local police chiefs and sheriffs whom we see on television briefing the press after these horrific shootings. Whether they’re heads of large urban police forces or small town sheriffs, these men and women are, without exception, well-spoken, responsive, professional and eminently competent. And this is under extremely stress-filled circumstances.

They choose their words carefully, they don’t twist facts, they don’t exhibit bias. They are candid yet cautious. This is not to say that these local officials are heroes or saints. This just makes me wonder why so many of our senators, governors, cabinet members, White House officials, and especially White House occupants, have none of these qualities. Why are there so many good people in government, and so few really good ones at the very top?

“Any time someone puts on a vest of some sort, comes out with a bag full of loaded magazines, has an extra receiver, has a handgun and has a semi-automatic rifle, carjacks folks, goes to a college, kills more people, and has to be neutralized at the hands of the police, I would say that that’s premeditated,” [Police Chief] Seabrooks said. . .

Shortly before noon, the gunman is reported to have fled on foot, firing randomly at passing vehicles, wounding one woman. He then carjacked a vehicle being driven by an adult woman and threatened to murder her if she didn’t drive him to the nearby college campus, Seabrooks said.

The gunman demanded the woman stop at various points along the mile-long ride to the campus so he could fire erratically at passing cars, police said. He sprayed bullets at a public bus, shattering glass and injuring three people, and then fired at Franco in his SUV, killing the driver – believed to be on the custodial staff at the college – and leaving the passenger with critical injuries.”  NBC News